Guest Blog: Opening Up the world of Braille

We interrupt your regularly scheduled programme to bring you our 1st guest volunteer blog! 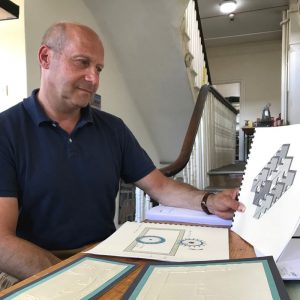 Robert is a dedicated Koestler volunteer and former auctioneer and valuer at Sotheby’s. This year he visited Eleanor Southwood at the Royal National Institute of Blind People (RNIB), to help her in the judging of our Braille category. When he returned to the Koestler office with the results, his account of the process enthralled the entire team. As a category that might not receive so much spotlight as other more obvious ones, it was interesting to hear more about the impact that the Braille entries have. Robert tells us more below…

I had a quick look at the material the night before I went to see Eleanor. Most of it is in Braille which I don’t read, but there are some pictorial things. I took them across to the RNIB headquarters and met Eleanor for the first time.  We sat down, and I explained a sort of overview of what we had to examine. But then we went through every single thing, piece by piece. Some were text items, some of which were transcriptions, and some of which were originals. The transcriptions are of existing books for sighted people. These were, in some cases, the first time anyone had converted them into Braille. So that was a very good experience for both of us. Eleanor explained to me that this was the first time an unsighted person would have had the opportunity to read those things. 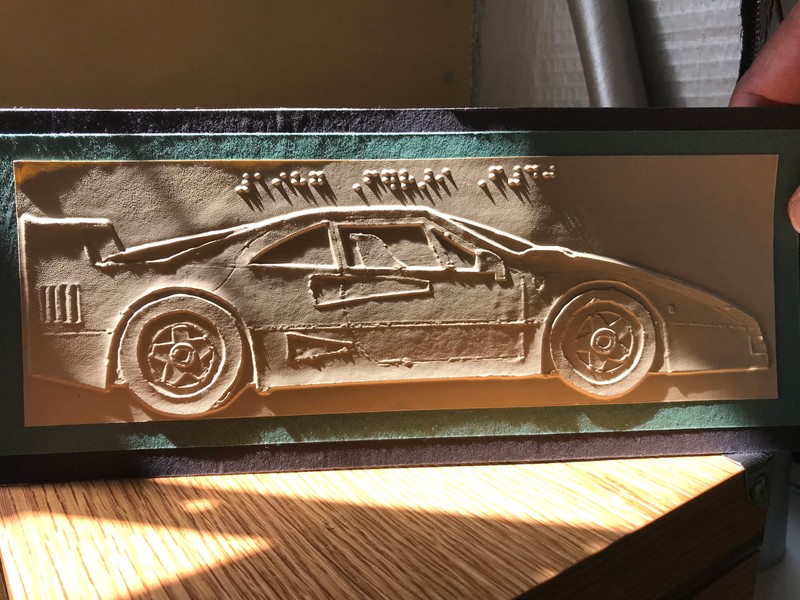 There were some slightly out of the way materials, like stories of heroes of the 19th century. There were also pictorial things, done in contour pictures. There were pictures of cars, buildings, and also a contour map of the London Underground, which Eleanor had never experienced before. Having to distinguish between the different railway lines, metropolitan, Jubilee and so on, through the touch of someone’s fingers, actually is quite difficult.

I, in my ignorance, had made a presumption that there probably was already a braille underground map. She was feeling that very famous design of the underground that we’re all so used to on the map. 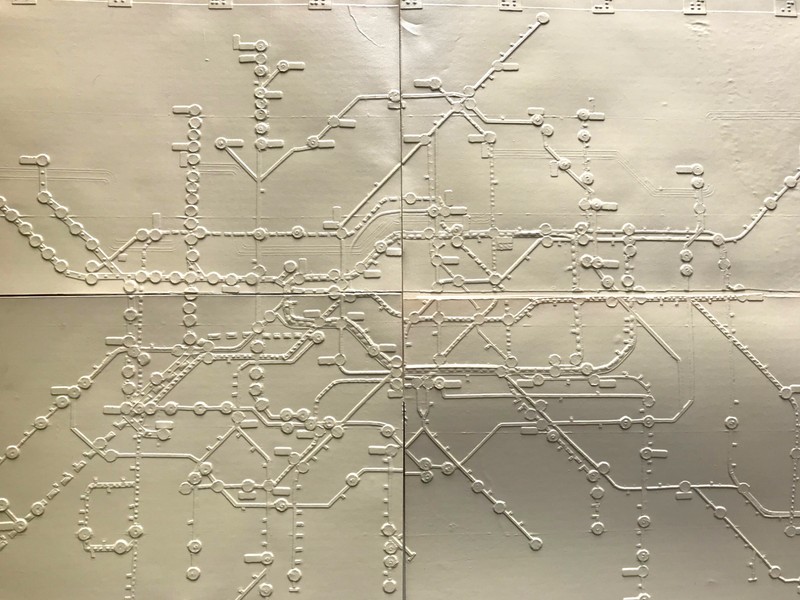 She didn’t know how the lines juxtaposed. For her to make a journey on the underground usually, she needed to know, in her mind, almost like a script where she needed to go, and the order of the stations. Start-point and destination. So, for her to actually put her had on a fold out map, showing how the lines all angled, intersected, the distances, and the stations, was quite thrilling for her.

A Question of Style

With the text, or transcription, it was mostly about layout. Just as with sighted text printing, with Braille, it was a question of – were paragraphs clearly delineated? Were the spaces in between the lines comfortable? Were there clear indications when a section changed, or paragraphs not getting too near the margins, top bottom and the sides? Because, just as if you found a page over-printed with too much text a bit overwhelming, so it is for an unsighted person to cope with a braille page with that much text printed too near the edges. With the original work, of course it was about content as well. There was, for instance, an introduction on how to play Braille music. And Eleanor was delighted to see that because she had tried to learn the piano as a youngster. She said, ‘if only I’d had this’. It was a great introduction.

And the special thing about that particular entry was that there was not only a description in Braille, but the contributor had also done it all in visual text. A sighted teacher could see it, with an unsighted pupil, and be working on exactly the same thing together.  She thought that this was an extremely good addition to the work. 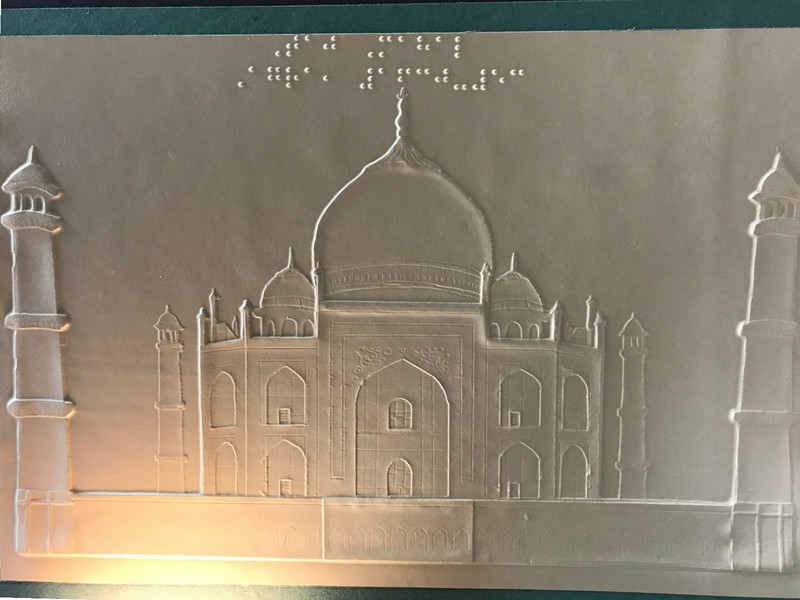 Amongst the visual entries, there were three contour pictures, two of motor cars, one a sort of Honda pickup, and the other of a Ferrari. Eleanor was amazed to be able to, with her fingers, detect the shape, scale and size of the Ferrari. She’d had no awareness of what they are like. And the low to the ground, sleek profile, was a revelation to her. She said she always knew people admired the cars but didn’t know why they admired them particularly. With the picture of the Taj Mahal in India, she was able to feel the shape of the outline of the building, the minarets, the dome, and the little pinnacle on the dome. She’d heard it spoken about all her life but had no idea what the Taj Mahal looked like; it’s scale or its shape. It was thrilling for her to finally be able to know what people were talking about. 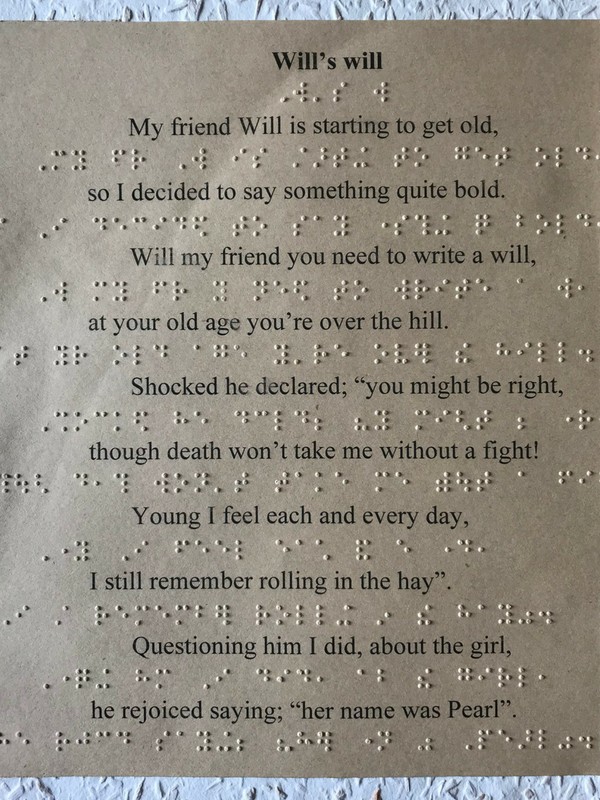 Some of the text entries were really big endeavours. One of the contributions was a complete commentary on the bible done in seven volumes. One of a Victoria Cross recipient – and she was able to read, I think for the first time ever, a citation, for the awarding Victoria cross, which are usually pretty inspiring things where somebody does something remarkable, under fire, and at great personal risk. But also, Eleanor was very appreciative that the same contributor had done one on a lady who had done remarkable things in the 19th century. It was the idea of bothering to produce something in Braille which had content that would be greatly appreciated, for her on a personal level, but more generally as well.

There was also a crossword puzzle book. Crossword puzzles, you’d think, are quite visual, but for the unsighted, of course the clues and the answers are equally challenging. Because Braille is bulkier, you have to have things on consecutive pages. She had constructive comments about how things could be improved, for her use.  Which was very interesting to hear. 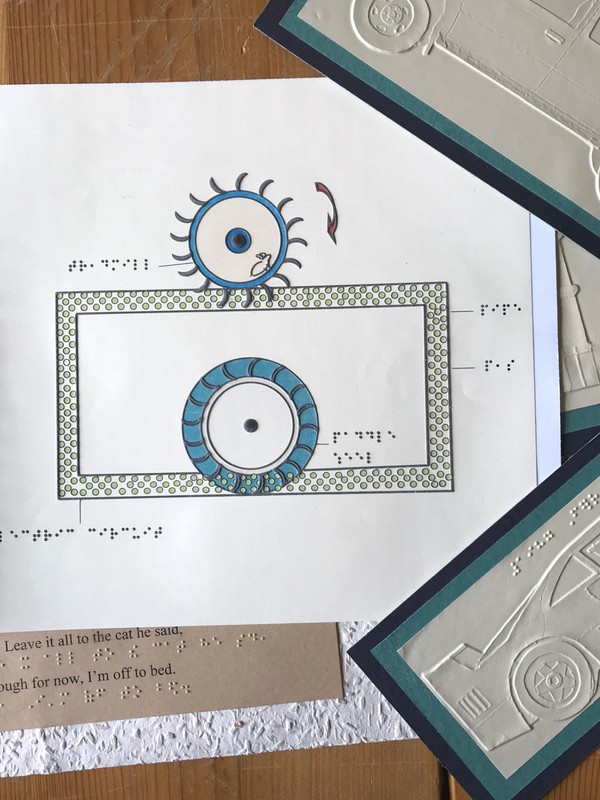 For me, it was truly an education, and an inspirational moment. To sit with an unsighted person and learn the points that she appreciates in works produced for the unsighted. There is as much complexity to Braille printing as there is to visual text printing. The layout can be attractive, unattractive, easy to use or not easy to use. That was a revelation to me, and I was very grateful to hear about that.

The more people there are working in Braille, effectively, the bigger the library for the unsighted becomes. It was a huge pleasure and a privilege to learn about that, and to be present when someone else was experiencing something for the first time. It was an amazing morning for me.