Sounding Off with Katie Redford 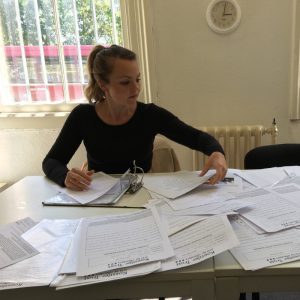 Among the first categories to be judged this week was Radio Play. For this small yet intriguing group of works, we were joined by writer and actor, and Lily Pargetter on the The Archers, Katie Redford. It was the diversity and ingenuity of this category that surprised her the most. She talks imagining audio worlds, days of radio play acting when she’s switched between reading for a period drama and being a caterpillar, and writing about the lives of napkins below!

Which stories have stood out to you the most?

People say that you should write about what you know, I think that’s really clear with some of these pieces. There are certain pieces that have been not only interesting to read but are an insight into their background. I’m not saying they’re autobiographical, but you can tell that some of these writers have written about what really means something to them and their experience. Writing is a really good way of dealing with things that have happened to you as well. A real insight into the environment of a prison – something I know nothing about. There’s a truth to it as well, it’s not just what you see on Orange is the New Black – there’s so much more to it.

What have you been surprised by?

The variety of things. I’ve gone from a piece that’s about a spoken word in a prison, to a sci-fi fantasy piece about aliens invading a cricket pitch. It’s the variety of it, has really surprised me.

How have you found the Koestler judging process in general? 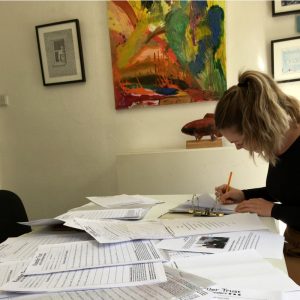 Katie reading through some of the many entries in this category

Well, I think it’s a lovely way to spend a day reading, so many imaginative pieces from voices that I wouldn’t usually hear from. It’s – I mean this in a positive way, it’s more intense than I thought it would be. Because you can’t just shut off – you have to read every piece because every piece matters, and you have to really think not just about what you like but makes a good radio piece. The sound effects, the way the scenes link to each other. With radio it’s really easy sometimes for the writing to be expositional because you’re not seeing it. You have to explain to the listener what’s happening. It’s really interesting reading who’s nailed that.

What advice would you give to radio play writers?

This sounds really silly, but just write. Don’t worry about what audience it will be for, or whether it’s been done before. Just write about something that you’re passionate about, and that you know about.

And why is it good for radio? Why would you write that piece for radio? Could it be done on tv, could it be done on film? If yes, you could still write it for radio, but what is it about it that you want to tell through the medium of radio. I think that if you have an answer for that, you’re already on your way.

Do you have any answers for that? What makes things really suitable for radio?

I think it’s subjective to each person, but for me, when working in radio as an actor, the scripts that work for me are the scripts that aren’t just dialogue. I think that people have this thing that with radio, because it’s voices, that if you have a really dialogue-heavy piece it will be brilliant for radio. But I don’t think that’s true.

I think that it’s harder for the listener to keep engaged without hearing some sort of action. So I think that’s a myth, that dialogue-heavy plays should be just for radio. 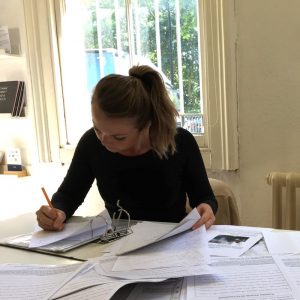 I wrote a radio play earlier this year, and the reason I wrote it for radio was because there were two characters that I just really wanted to write for. I could have written it for anything really, but I like the world of radio because there’s no limits with what you write. You can write anything, anywhere. You don’t have to worry about budget – when it comes to making it. You can write anything for anyone. I just wrote a play about a napkin – the world and the life of a napkin. And it was lovely. There are no limitations on what you write. You can make anything come to life, and I think that’s something really interesting from a writer’s perspective, and from an actor’s perspective.

When I was on radio 4, one morning I’d be doing a script for a period piece like Jane Eyre, and then the next minute I’d be a caterpillar. You can literally be anything you want!